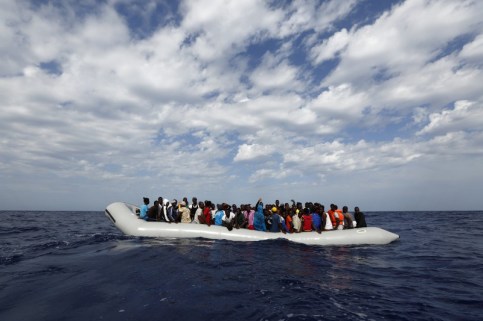 The UN Refugee Agency recounts news of many refugees worldwide, such as these (in the picture above) who escaped Libya for Europe: UNHCR . Consider how horrific the conditions would need to be, in order to compel you to embark on such a journey, crowded onto a boat, abandoned to the hazards of the sea.

In our human histories, most of us can trace our ancestry to refugees – or immigrants – of one kind or another. The biblical myth of origins, about Adam and Eve, inscribes into our collective spiritual autobiography such a story of expulsion and exile.

The preface to the Gospel of John 1:1-18 replicates this story of being a refugee, a stranger in the world. God is a refugee and stranger.  The outcome of the story, however, need not be tragic, as 1:12 promises, “To all who received him, who believed in his name, he gave power to become children of God.”  (1:12)

How do we receive the refugee, the stranger? Who embodies the creative Word ?

To recapitulate John’s prologue: The light-bearer Jesus Christ is identical to the creative Word, which brings all things into being (alluding to Genesis 1; John 1:1-5). See earlier posts in our study of John, e.g. :  The Invisible Power of Creativity The prophet, John the Baptist, who is attuned to this creative Word – announces its coming (1:6-8), equivalent to the “true light that enlightens every human being” (1:9).

Tragically, the world does not recognize its own creator, for the light-bearer (Jesus) is rejected: “He was in the world, and the world was made through him, yet the world knew him not. He came to his own, but his own people received him not” (1:10-11).

According to the evangelist John, Jesus Christ embodies God.  Because the world is estranged from God, God appears to the world as a stranger.

The stranger may be an actual refugee in our midst, since all of us share the divine spark.  To recognize the divine within another is to honor our very selves.

Or the refugee may be our own selves. The creative Word, lodged within, is the foundation of our being. Yet, we make of ourselves an exile.

Question: Where are you making your self an exile? How can you extend hospitality to this alienated part of yourself?

Who decides your birth and makes sure that you are safe in the womb? Whoever it is, it is not “you” as you may define yourself, in terms of your social roles on earth or your human history. Make friends with the creative principle of the universe, which exists inside of you.