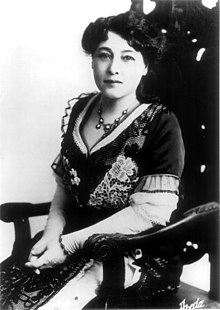 Alice Guy, the first female film director, produced a film (silent) on the life of Jesus. Consisting of 25 painted tableaux (typical of passion plays), together with location scenes (which take place outdoors), La Vie du Jesus (1906) is distinctive for its portraits of women.

Guy highlights Mary Magdalene’s primary role as the first witness of the risen Christ (Matt 28:7; John 20:11-18). Whether or not her themes count as “feminist,” Guy seems to go out of her way to include women in every scene–for instance, instead of  Simon of Cyrene, as the one who carries the cross of Jesus (Luke 23:26), six women do.  Eight women find the empty tomb (Luke 24:1-5), while many women are present at the foot of the cross.

Here’s the film (which runs 33 minutes).

The Bible in Motion: A Handbook of the Bible and Its Reception in Film
edited by Rhonda Burnette-Bletsch, See contribution by Carol A. Hebron, re: Alice Guy and La Vie de Christ, ch. 32, pp. 545-547.